Update: Looks like Twitshirt is changing their policy. Great to see a company respond so quickly to the community. 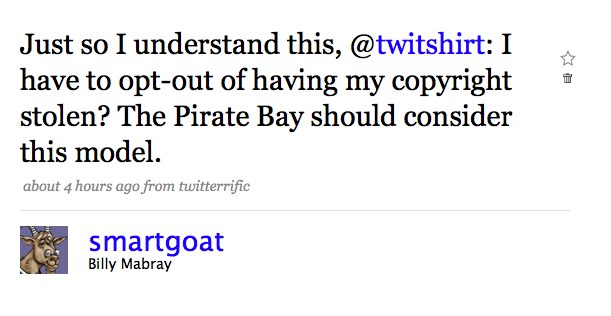 So, yeah, Twitshirt. I want to be clear that my objection is not for me personally. Do whatever you want with my words — once I’ve said them, I’m done with them. In fact, once they switch from the password anti-pattern to oAuth I’ll likely sign up and dutifully wait the 20 years it will take for me to earn enough to get a check. But that’s me, and you should never assume you can use someone else’s work without permission.

Because that’s really the problem here: permission. While royalties and opt-out forms are improvements over past attempts to sell tweets on shirts, it’s still not right. That’s not how copyright works. I can’t stand on a street corner and sell copies of Wall-E with a simple disclaimer that I’ll stop if I’m asked to. And Disney’s certainly not going to be interested in my offer of a 2.5% royalty.

It’s made worse by the fact that Airbag Industries, the company behind Twitshirt, is one I really admire. I expect better than this from them. My guess is they didn’t think it through. If they had, they would’ve seen that opt-out is wrong. They also might have realized all the other problems they were setting themselves up for.

Now, how ‘bout we print this shirt:

Think anybody will have a problem with that? Or maybe something like this:

Our little tweetshop has been in business five minutes and we’ve already committed copyright infringement, trademark infringement, and libel. Feels like a Monday, doesn’t it?

It’s a good idea. A really good idea. But from a practical standpoint, it just doesn’t work. I can only think of two ways to do it right: Create a CafePress style site, where individual Twitterers set up their own shops and you take a cut. Or, find individual tweets you like, negotiate a price with the writers, and sell limited runs of the shirts. Offering any tweet is so tempting, but it’s a world of hurt.

I hope Airbag realizes they’ve made a mistake and, at the very least, switch from opt-out to opt-in. It matters because words matter, regardless of whether you can sell them on a t-shirt.